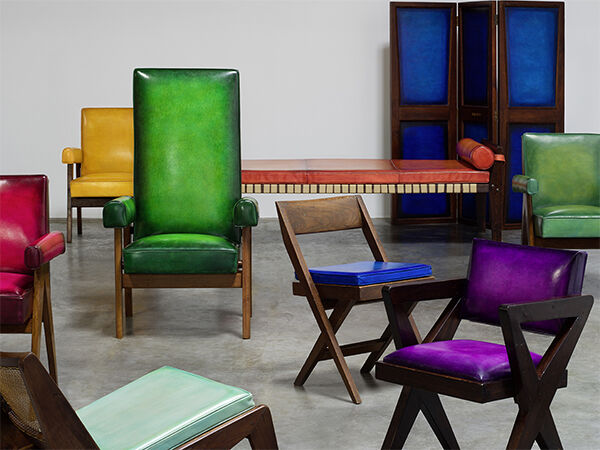 Berluti’s creative director Kris Van Assche and François Laffanour of Galerie Downtown team up to present a small series of original Pierre Jeanneret pieces, created by the Swiss Architect in the 1950s, to furnish Chandigarh’s Capitol Complex, in India, restored by François Laffanour and upholstered with Berluti’s emblematic Venezia leather.

Kris Van Assche has developed an entirely new palette of colour for the series. Based partly on the two colour collections Le Corbusier created in 1931 and 1959 and as well the rich colours he found in the light, architecture, landscape and foliage on a recent trip to Chandigarh. Subtly nuanced hues have been specially tanned in Verona from calves raised in northern France. The addition of Berluti’s hand-applied patina enhances the depth of colour and the gentle curves of the soft padding. Van Assche has boldly chosen 18 different tones for the 17 pieces, no two are the same; the day bed comes in Nespola orange, the paravent folding screen is finished in two shades of blue set in a damier pattern and pairs of chairs have been deliberately mixed up with contrasting colours such as the two cinema chairs, one in Sukhna purple and one in Simal red. The only piece Kris Van Assche has chosen to upholster in Berluti signature tobacco colour is the writing chair, although originally constructed in wood, it was painted blue later in life, to identify its use as chair for the university, a historical and important intervention according to Francois Laffanour. It’s one of a few pieces with rattan seats, the new leather cushion has been attached with magnetic fixings so as not to compromise the integrity of some of the originals. 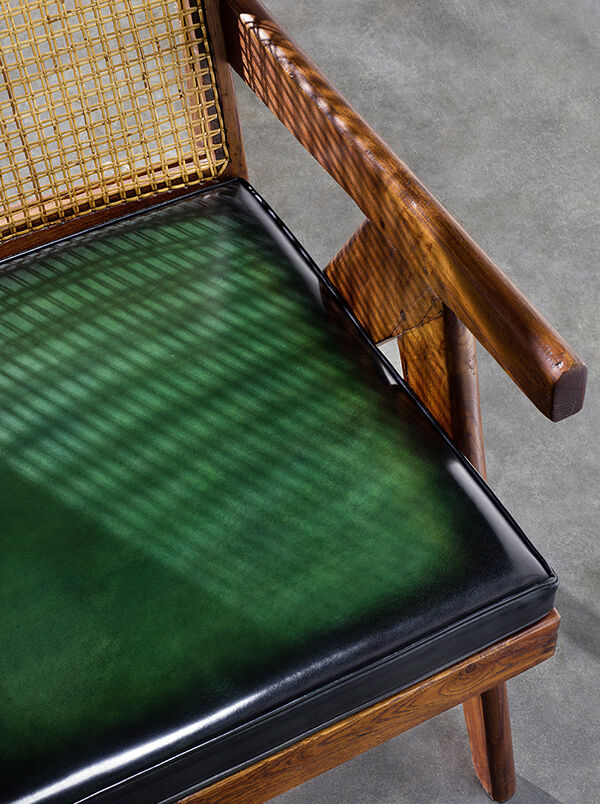 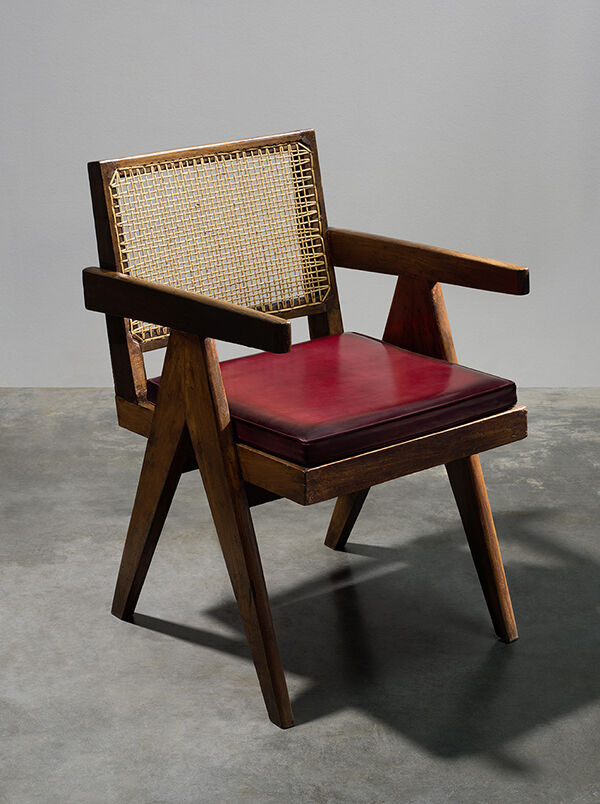 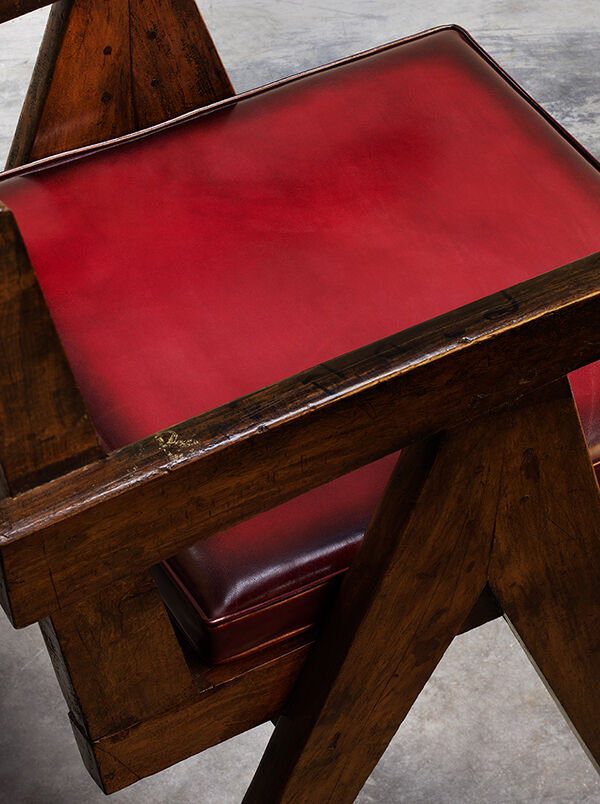 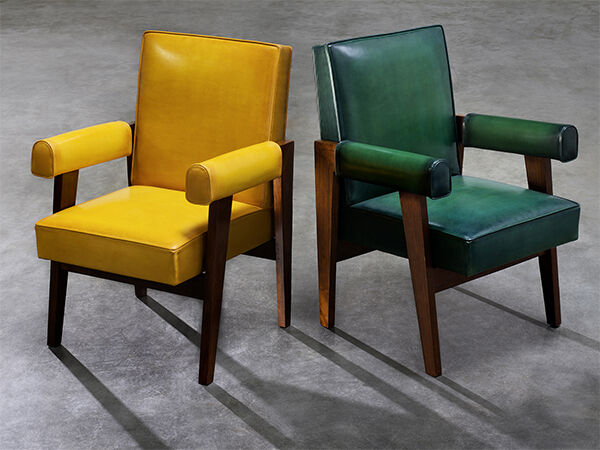 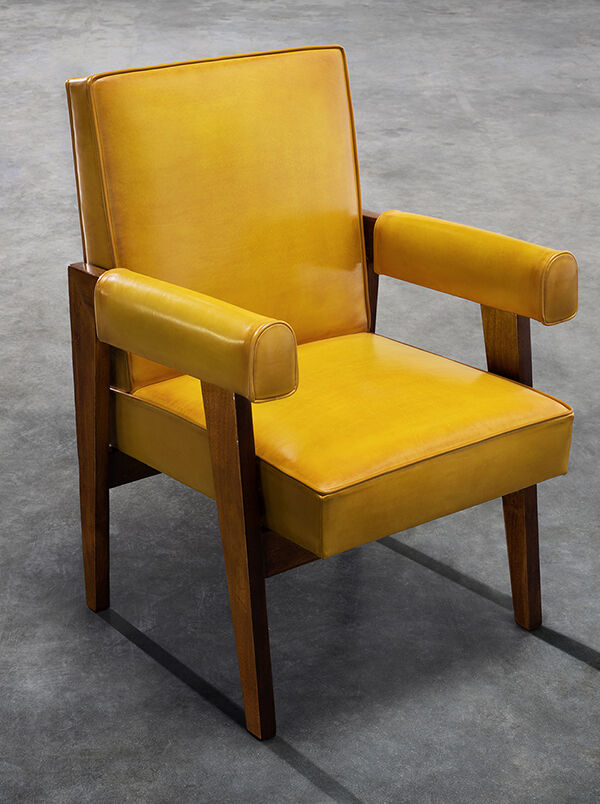 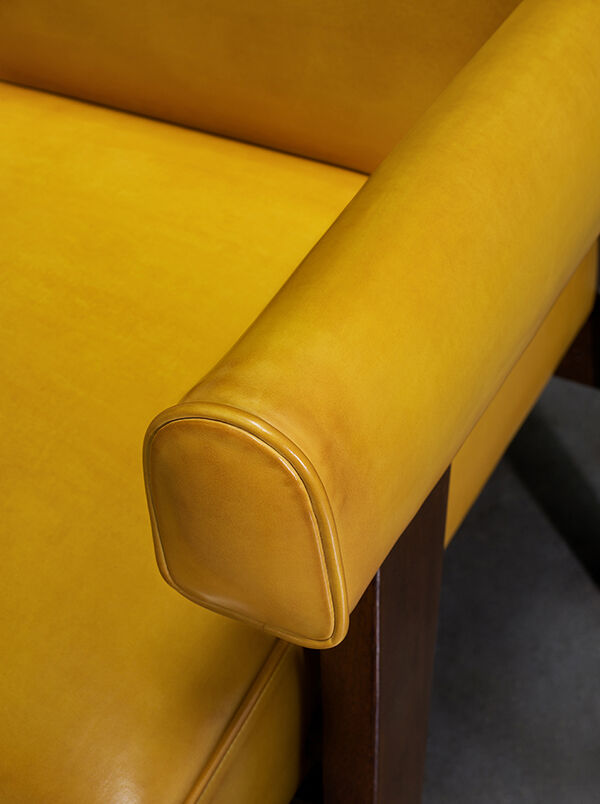 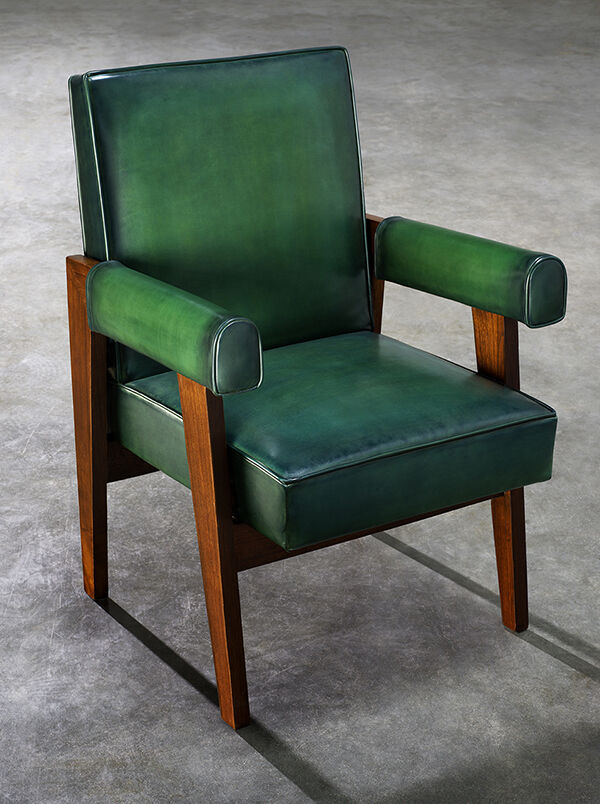 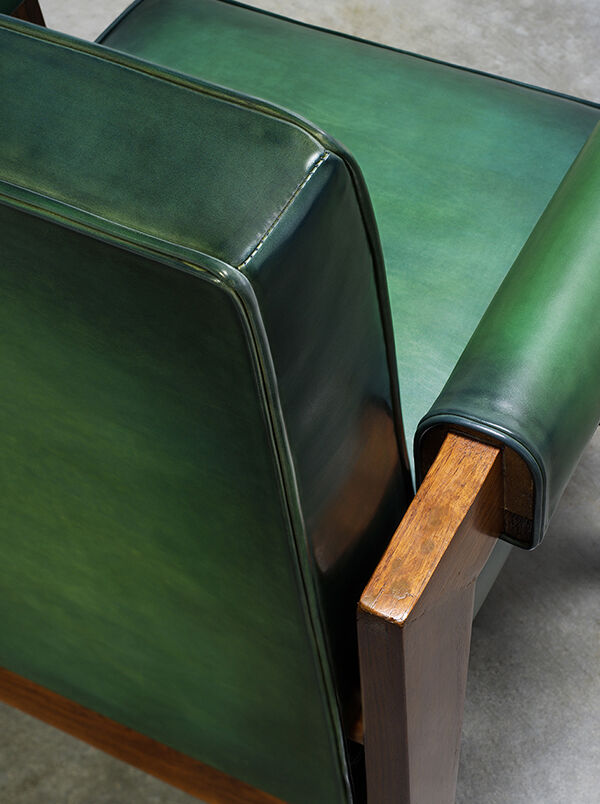 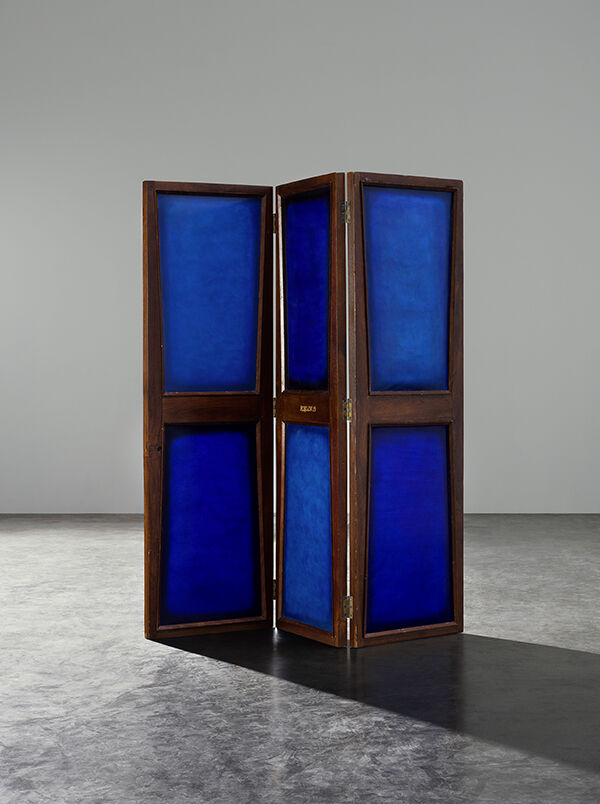 Kris Van Assche and François Laffanour built a friendship built on a shared passion for 20th century design, as Van Assche is a collector of Pierre Jeanneret pieces. In 2018, Van Assche’s debut collection as creative director of Berluti was presented in Place de la Concorde inside Jean Prouvé’s 1958 prefabricated structure for Institution Fénelon, restored by Galerie Downtown. The Capitol Complex in Chandigarh was selected by Kris Van Assche as a location for Berluti’s fall winter 2019 digital campaign photographed by Ronan Gallagher.

Laffanour says that he and Kris Van Assche have the same taste ’This project is really something friendly, I like the man, the way he thinks, I am honoured to build this collaboration with Berluti and Kris, it’s not really work it’s more of a pleasure’.
For Kris Van Assche before taking the creative lead at Berluti in 2018 he had already made a link in his mind between the furniture of Pierre Jeanneret and Berluti’s DNA; colour and patina ’I have always loved and collected Pierre Jeanneret’s furniture. I knew that the Berluti patina know-how would give back all their splendor to those iconic pieces, aged through time. It is an opportunity for this Berluti craft to be rediscovered in a new context’.

Each piece was numbered at the time of manufacture, and additionally Berluti have numbered the new leather elements. The upholstery has been entrusted to Domeau & Pérès, the Paris-based upholstery and leatherwork. workshop founded in 1990 by master craftsmen Bruno Domeau and Philip Peres.

The series will be presented in Miami’s design district during Art Basel Miami Beach from December 2 to 8, 2019. 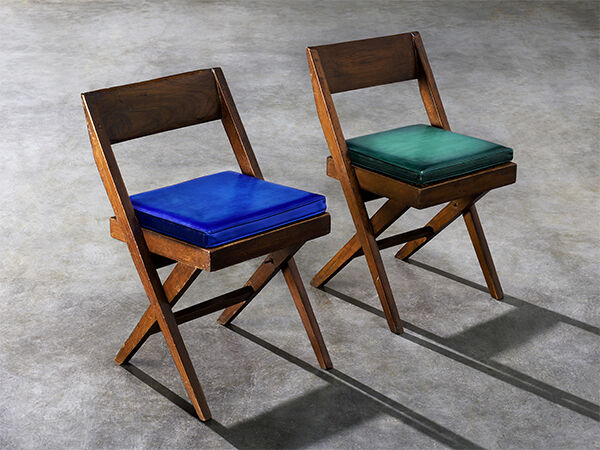 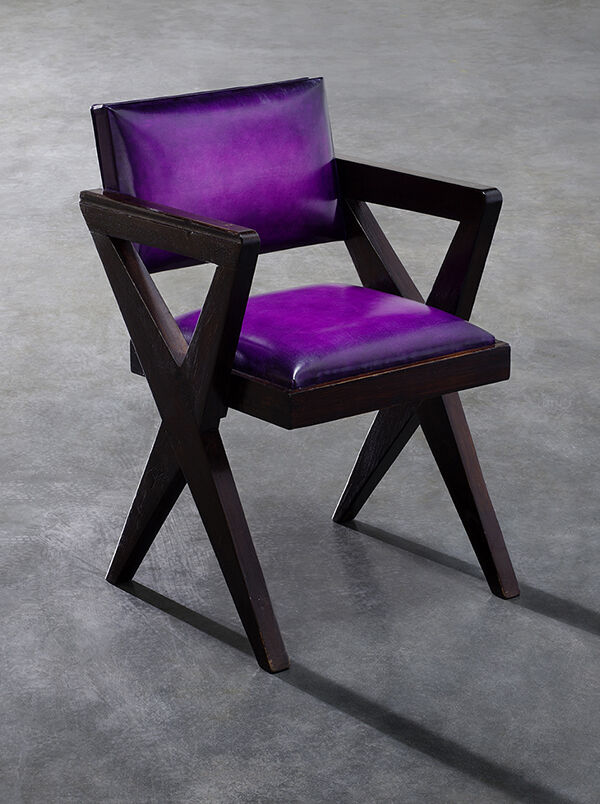 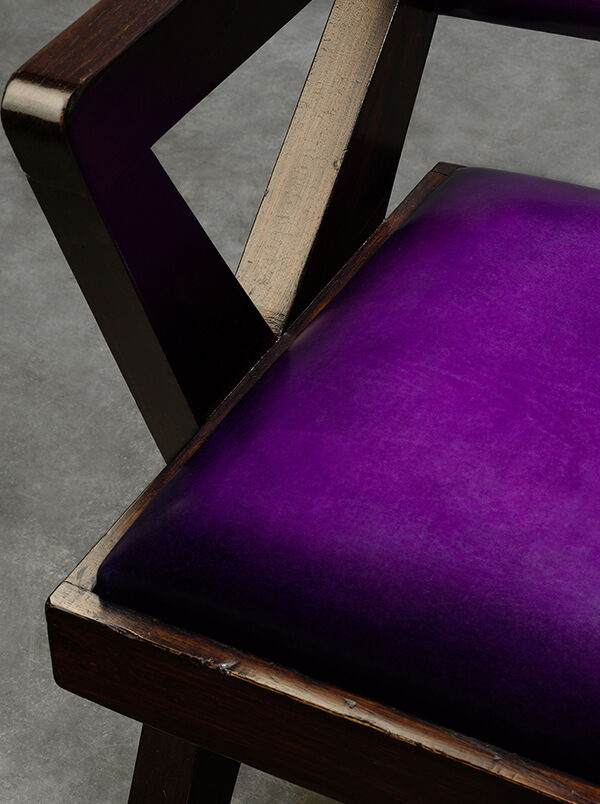 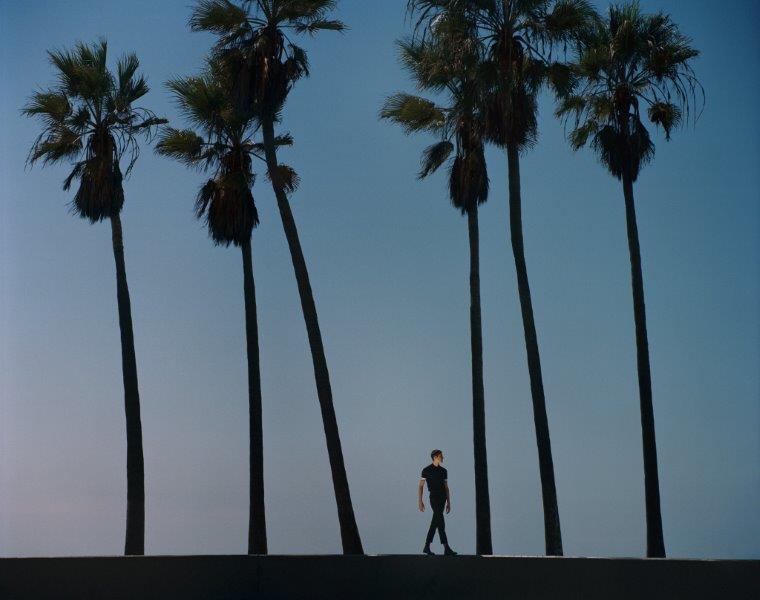