This year, Maison Berluti celebrates its 125 anniversary by reimagining its iconic Andy shoe as a Penny Loafer through a unique collaboration with Monnaie de Paris.


Established in Paris in 1895 by a 30-year-old Italian-born shoemaker named Alessandro Berluti - creator of the Alessandro, the brand’s first lace-up shoe -, Berluti has since kept evolving and innovating through four generations of craftsmen. Known for its artisanal know-how and its unconventional charm, the Maison has kept honing its bootmaker expertise through the 20th century, approaching shoe crafting as sculpture, creating new emblematic models and developing the art of the patina to introduce color in the world of men’s shoes.

In 2005, it unveiled leather goods, accessories and objects, before first introducing bags – including the emblematic Un Jour and the Deux Jours briefcase -, small leather goods, accessories and objects in 2005, before expanding into ready-to-wear in 2011, making Berluti a global lifestyle brand. Since his appointment as Creative Director in 2018, Belgian-born designer Kris Van Assche has taken Berluti’s curious and audacious spirit a step further, and his high energy collections and one-off collaborations - such as the upholstering of Pierre Jeanneret’s Chandigarh furniture in colorful patinated Venezia leather - are forward-thinking yet firmly rooted in the brand’s heritage.

In honour of its 125th birthday, Berluti is now highlighting its most iconic loafer, the Andy - designed in 1962 by Olga Berluti for Andy Warhol - and turning it into an authentic Penny Loafer, a favourite of the prep school and college crowd who, in the early 20th century, would keep a penny in the half moon cut out slot of the leather strip on the shoe's upper, to use on pay phones. The ornamental penny - stamped with Berluti's crest and lightly curved for comfort - has been especially crafted by Monnaie de Paris, the French manufacture located along the banks of the Seine responsible for producing coins and medals since the year 864.


Berluti’s limited edition Penny Loafer is available in four different versions, all made in hand patinated full grain, uncoated, soft Venezia leather. A gold coin integrating the brand’s emblems - from the Scritto motif to the new logo and the Signature Canvas print - completes a TDM Intenso-coloured loafer, while silver coins add the finishing touch to Ice Brown, Deep Rothko and Deep Red patinas. Details include a special 125 anniversary insole with Berluti’s logo, as well as a dedicated wooden shoetree embossed with the Berluti crest.

To complete the offering, Monnaie de Paris has created a selection of silver and gold coins celebrating Berluti’s trademarks, from the Scritto motif to the Signature Canvas monogram, the crest and logo, the bootmaker studs and the Andy footprints, in three different sizes. Made from one kg of silver, the biggest one is shaped as a loafer’s heel and encrusted with an embossed Venezia leather detail. Its leather packaging mimics that of Berluti’s custom-made shoes. These exceptional pieces - also a limited edition -, are true collector’s items. 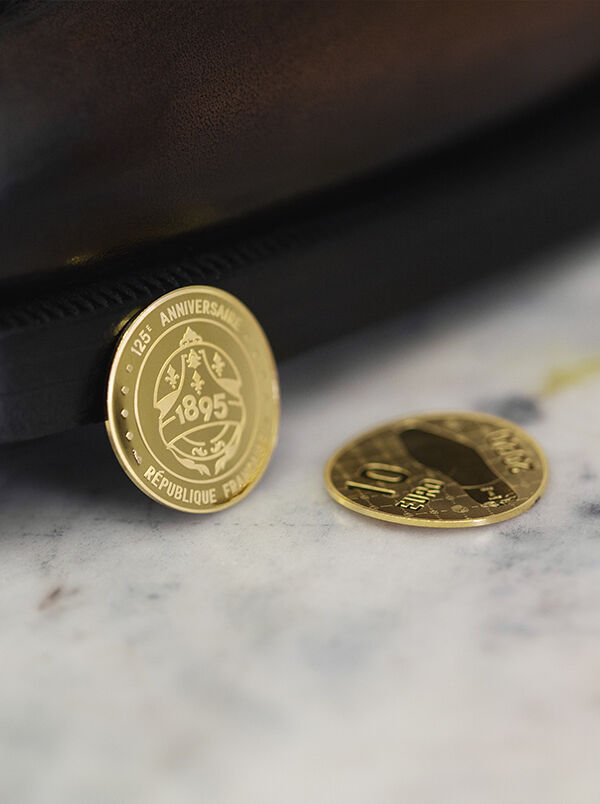